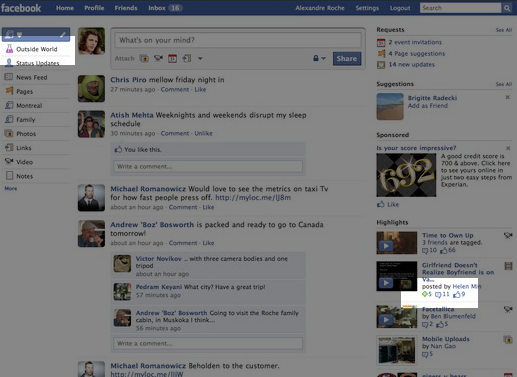 Screenshots posted in a note on the Facebook Design Page today may have revealed a little more than just the differences between rounded and square corners.

FBHive have noticed two mysterious new features on Facebook Product Designer Alexandre Roche’s profile. The first is a News Feed filter with a lab beaker icon labelled “Outside World”. The second is a plus (+) icon and number next to the Comment and Like numbers for a video in the Highlights section.

Screenshot and our thoughts after the jump.

So what could these mean?

Our guess is that “Outside World” is referring to the world outside of Facebook (a.k.a. the rest of the web) and that the filter itself would show you all the non-Facebook content you’ve subscribed to. Yes, subscribed to. We believe it’s highly possible that Facebook will introduce the ability to import RSS feeds into your News Feed and group them just like friends and Pages. This would be a very powerful feature and could prove to be a significant competitor against other web-based feed readers like Google Reader. But don’t just think blogs: every Twitter user has an RSS feed you can subscribe to. Imagine being able to check recent posts from blogs, Twitter users and of course, Facebook friends, all from the one website. Facebook would (potentially) become your one-stop hub for recent news and information.

MyReadingManga Review: A Comprehensive Guide To This Popular…

While there is a chance this could just be a third-party application filter the user has installed, given its highly preferential position in the filter list and the fact that there are no other third party applications, we feel this is unlikely. More significantly, the beaker icon itself appears in a Facebook sprite image, and it most likely indicates the feature is still experimental and has not had an official icon designed yet.

Now, on to the second feature. In the profile’s Highlights section there’s a video, posted by Helen Minn (who also happens be a Facebook employee), that has 9 Likes, 11 Comments, and 5 “Pluses”. Hmm, that green plus icon looks familiar… Hang on, isn’t that the Facebook Credits icon? Yes, it is! See for yourself in the Facebook Help Center, next to “Credits”.

We suspect that Facebook has a feature in the works that allows users to give Credits to content. If opened up to the public, this feature could prove to have some incredibly powerful microeconomics. Directors and musicians could be tipped for their videos and songs that they post on their Facebook Pages. 3,000 users giving just 50 cents (5 Credits) to an artist once a week would be enough for someone to live off. With Facebook’s users numbering a quarter of a billion, this is no pipe dream.

So, what do you think? Do you agree with our speculation? Let us know in the comments or twitter us @FBHive.

Update: TechCrunch picked up our article and contacted Facebook about it. Facebook have since responded and explained that the “+” is indeed Credits given to a video and is a feature Facebook has been testing since April that allows users to give credits to each other for content they share. “Outside World” has a less exciting explanation: apparently it’s a feature for Facebook employees that allows them to filter out the streams of other Facebook employees and see only the streams of their non-Facebook friends. Mystery solved, gang.